7 questions literature asks us over and over again

Read enough books, and you’ll notice that some questions never die. They’ve been with us since the first cuneiform was scratched into a tablet, and though our answers have evolved over time, we’ll probably never let them rest.

See what you think:

This question can be found in the most ancient chambers of literature’s heart. Beowulf, Gengi, and Odysseus all have to defend their status as heroes in one way or another.

In Iliad, Achilles spits out the definition of a hero when Agamemnon threatens his reputation by taking away his war prize: “The gods have made thee but by halves a king. They gave thee scepters and a wide command. They gave dominion o’er seas and land. The noblest power that might the world control they gave thee not–a brave and virtuous soul.” 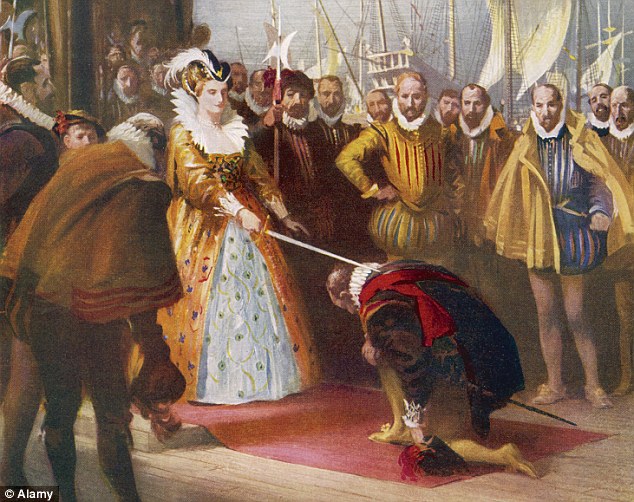 The knight’s “code of chivalry” set the standard for heroes during the medieval age.

Interestingly, modern literature seems to have added a contingency. Brave and virtuous souls are great and all that, but to be a real hero, you can’t be interested in gaining power. As Albus Dumbledore explains, “It is a curious thing, Harry, but perhaps those who are best suited to power are those who have never sought it.”

2. What value do misfits have in society?

If, as Dumbledore suggests, you’re looking for heroes among “those who have never sought [power],” you could do worse than to start with society’s misfits. Generally speaking, literature is quite kind to misfits. If they don’t become protagonists themselves, they at least come through with some rare knowledge at a moment when the protagonist is stumped.

But misfits weren’t always so welcome. Early epics like Gilgamesh and Beowulf treated outsiders as villains–not all that surprising, if you stop to consider these early epics functioned as a rallying cry for men to come out of the wilderness and start building civilizations. By the time civilization was established and Arthurian legend rolled around, literature had changed its tune. Merlin is an excellent example of an eccentric fringe dweller without whom society would fall to the rule of men driven by more conventional motives: greed, power, glory.

Today literature strives to be as inclusive as possible, drawing in diverse, inspirational characters like August in Wonder, Augustus in The Fault in Our Stars, and August in August Rush. Wait. Am I missing something?

3. What is worth dying for?

When a protagonist walks into a death trap, he usually has a good reason. He may be protecting someone he loves, sacrificing himself for “the greater good,” or seeking revenge for some terrible crime.

One variation of this question comes up frequently in literature: is war/patriotism worth dying for? War has been a dubious justification for death since the very beginning of literature. Homer made it clear that the Trojan war was not driven by noble motives but by human ego and greed. The loss of life associated with the war was both tragic and illogical. Yet the Trojan War was also an opportunity for men to trade their lives for eternal glory; many men are “ennobled” at their moment of death because they have been slain by heroes like Hector and Achilles.

Later in literature, Victor Hugo painted a similarly ambiguous picture of the Battle of Waterloo. Hugo’s Waterloo was a bloody day, illogical and ill-fated, but it was also a moment for men to show their true colors. 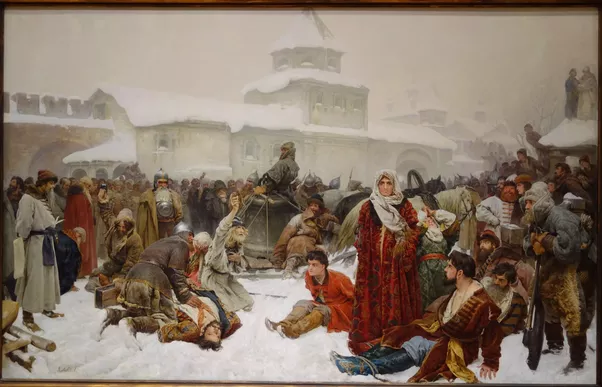 Some victims of war, like these citizens who fell to Ivan III, don’t get to decide whether or not the fight is worth dying for.

After World War II (and especially after the Korean and Vietnam Wars), literature seemed to come to the consensus that war is not worth dying for. Tim O’Brien’s The Things They Carried makes a strong argument for the almost surreal absurdity of war, while Wilfred Owen’s “Dulce et decorum est” tells us in no uncertain terms that there is no glory in dying for one’s country.

4. When is it okay to kill someone?

On the other side of the coin, literature asks, “What is worth killing for?” There are straightforward answers. Some characters (particularly comic book heroes) have the luxury of killing villains whose hands are hovering over a “destroy the earth” button. Then there are characters who kill out of self-defense, a little more grey, since the character is essentially deciding that his life is more valuable than the other person’s life. However, most courts of law pardon killing for self-defense, and the majority of people who are forced to kill in self-defense move on without being haunted by regret. 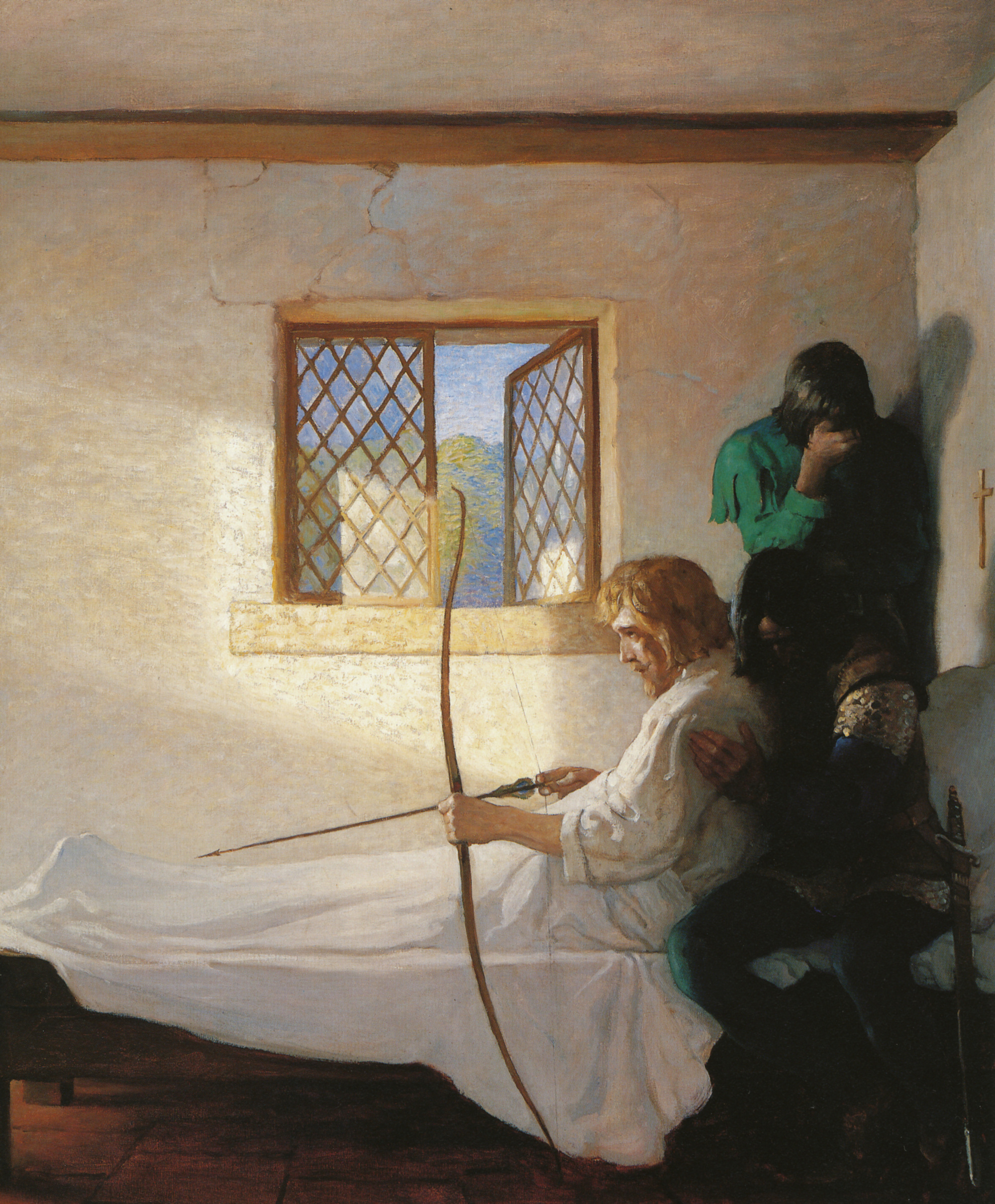 Robin Hood was one of the first heroes to be applauded for choosing not to kill enemies when they were within reach.

Trickier situations arise when there is no immediate threat to anyone’s safety. Revenge killings almost always put their characters in moral jeopardy. Sometimes the killing makes a hero more heroic; Westerns are particularly fond of glorifying situations where a bad guy gets his “come uppance.” In other cases, the desire for revenge eats away at a hero until he is corrupt.

Steinbeck’s Of Mice and Men poses this question in a highly creative (and morally frazzling) form when George decides to kill his mentally handicapped friend, Lennie, to protect Lennie from being captured by a lynch mob. A weaker book might have allowed George to gun down the mob or smuggle Lennie out of the country, but Steinbeck forces us to face the hard question. Was it okay to kill Lennie?

5. How much do good intentions count?

The Lennie quandary brings us to another difficult question lurking behind the covers of many great books. Do good intentions excuse terrible outcomes?

In Of Mice and Men, Lennie had no intention of killing Curley’s wife. He didn’t even have the mental capacity to understand what he was doing. Tragically, all he wanted was to pet her pretty hair. Does that mean he shouldn’t be held responsible for her death? The lynch mob coming after him clearly has an opinion on the matter.

Lennie accidentally killing a woman is tough to swallow. But wait. There’s worse. In The Song of Achilles, Patroclus offers to don Achilles’ armor and ride into battle, hoping to save his lover’s honor and chance at immortal life. Instead, Patroclus is killed in battle by the one person who can bring about Achilles doom, thus forcing Achilles to start down a path that leads inevitably to his death. The result of Patroclus’ actions are the exact opposite of his intentions. Do we judge him by what he meant to do, or what he actually did?

Do the deepest romances have rocky, Elizabeth-Bennet-and-William-Darcy style beginnings? Should you be friends for years before you fall in love, like Ron Weasley and Hermione Granger? Or is love at first sight, as seen in Anna Karenina and Count Vronsky, the best way to go?

Fans of literature are deeply divided by Cathy and Heathcliff’s relationship in Wuthering Heights. Some rate it as the greatest love story of all time. Others find it downright disturbing.

I analyzed sixty literary relationships to try to answer this question, but perhaps Love in the Time of Cholera has the most honest response: “It is incredible how one can be happy for so many years in the midst of so many squabbles, so many problems, and not really know if it was love or not.”

Some stories take fate head-on by setting up prophecies that may or may not be broken, time loops that can or cannot rewrite history. (Spoiler alert: the prophecy usually comes true, and history is rarely rewritten).

Other stories play a more subtle game with destiny. Instead of a struggle between man and magic, they show a struggle between man and reality. In The Sun is Also a Star, a blossoming romance is nipped in the bud because, despite her best efforts, the heroine can’t get her deportation ruling overturned. She is forced to leave the country. In The Age of Innocence, a man is forced to give up true love because he has been raised with the values of a gentle society. His upbringing will not allow him to enter into a scandalous relationship, no matter how much he wants to. In these cases, society (not the protagonist) seems to decide the end of the story.