Why does the south get its own genre?

I didn’t just grew up in the south. I grew up on southern fiction. I moved up from children’s books like Because of Winn Dixie and Bud, Not Buddy to the more intense Roll of Thunder, Hear My Cry! and To Kill a Mockingbird and finally to the haunting The Color Purple and Absalom, Absalom!

The fact that one branch of regional literature could support me all the way from baby bookworm to analytical adult is remarkable–as is the fact that “southern fiction” is the only regional genre identified by Amazon’s publishing platform.

What is it about the south that keeps drawing readers (and writers) back for more?

Let’s start with the slave trade. Every single state, north of the Mason Dixon line, had abolished slavery by 1804. The south, on the other hand, was still relying on slave labor to drive its agricultural economy until 1865. It’s no secret that many of those slaves were subject to barbaric treatment. We are still haunted by their stories.

Following decades of slave labor, the south was rocked by the Civil War. Despite the absence of automatic weapons, the Civil War has an American death toll second only to WWII. Note that almost all the major battles of the Civil War took place in the south. Our soil soaked up that blood.

Only one major battle, the Battle of Gettysburg, was fought in a union state.

After the Civil War, the south suffered through a terrible reconstruction phase. Our glamorous upper class had been deposed. Many of their plantations had been looted, destroyed, or (understandably) abandoned by their African American work forces. Their money was worthless, since they had exchanged their US currency for Confederate notes. In addition to the loss of our aristocracy, all of our major cities and much of our fertile farmland had been reduced to char by General Sherman’s “March to the Sea.”

At the same time that our pride had been blistered by the loss of the Civil War, we were stricken with circumstances that cultured poverty and desperation. That strange combination of pride and desperation is still very much a part of southern culture, where we celebrate the extreme examples of redneck resourcefulness and tote guns around everywhere we go, as if we might be attacked at any moment.

Ingenuity helped southerners pull themselves through reconstruction without bowing and scraping to the north, and it is still prized today, along with a sort of defiant “we don’t need your ‘culture'”  attitude.

And even after the white establishment got back on its feet, African Americans continued to suffer from violence and poverty. In the south, the end of slavery was little more than a nominal end. Millions of African American people remained on the same plantations, working as sharecroppers. White landowners continued to abuse them, demanding an exorbitant share of the African American people’s crops and effectively killing any opportunity that they had to build up enough wealth to buy land of their own. Later, the Jim Crow laws emerged to further disenfranchise African Americans, and lynching mobs were always at hand to back up Jim Crow.

When you add up all the horrors that have gone down in the south, you get a landscape that is rife with gut-wrenching stories. As a writer, you don’t even have to dream up conflicts to drive your plot. You can just borrow one of the nightmares from the south’s history and run with it.

Two novels are commonly sited as the great American novel: F. Scott Fitzgerald’s The Great Gatsby and Mark Twain’s Adventures of Huckleberry Finn. Both novels are fantastic in their own right, yet they have little in common, other than their excellence. For instance… 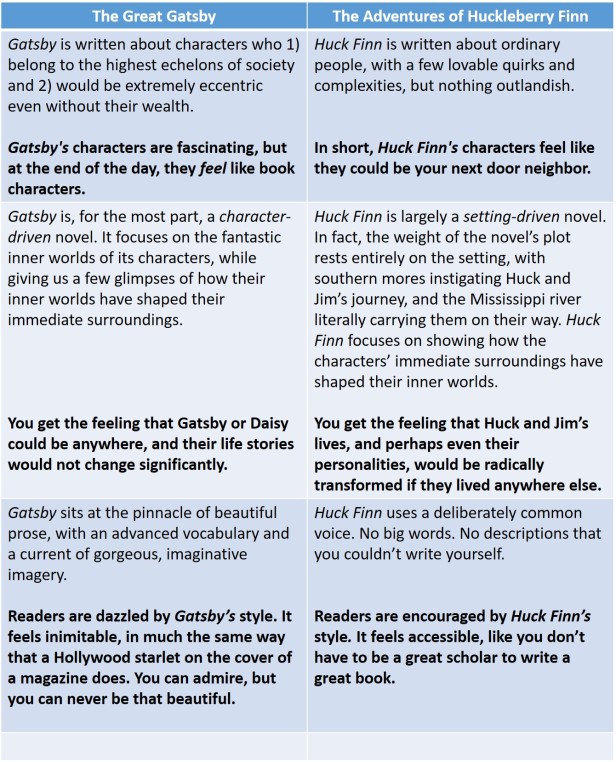 So what’s the take-away? Not only was Mark Twain a fantastic writer, he was a writer who stressed the significance of his setting (the south) and who made writing accessible to the average person. Twain created a legacy that welcomed southerners to take up the pen and tell their stories, and the result has been a flood of southern novels including To Kill a Mockingbird, Gone with the Wind, The Color Purple, I Know Why the Caged Bird Sings, Beloved, Because of Winn Dixie, The Help, The Secret Life of Bees, anything that William Faulkner ever wrote…

I mentioned this before, but it deserves its own section. Southerners are deeply attached to their cultural identity. Our hills have more fireflies than your hills. Our songs have more rhythm than your songs. Our momma’s fried chicken tastes better than your momma’s anything.

In Outliers, Malcolm Gladwell analyses the south, which he describes as “a culture of honor.” Gladwell traces the fierce loyalty that most southerner’s harbor for their land, their people, and their customs back to the original settlers of the south: shepherds from Scotland and Northern Ireland who had to be on constant alert for threats to their flock. Gladwell proposes that this protective instinct may have even trickled down to the genetic level, meaning that southerners are genetically hardwired to hold fast to their culture.

This same idea is expressed in Gone with the Wind, one of the south’s most beloved novels, when Mr. O’hara tells his young daughter, “”It’s proud I am that I’m Irish. And don’t you be forgetting, Missy, that you’re half Irish too. And to anyone with a drop of Irish blood in them, why the land they live on is like their mother.”

Oh, and let’s not forget a third group of people who settled the south. At the peak of the slave trade, 40% of the south’s total population was enslaved–and they had their own reasons for clinging to their culture, despite tremendous oppression. That reason is pretty well summed up by the title of Maya Angelou’s novel I know Why the Caged Bird Sings; indeed, the south owes some of its most lyrical and heartfelt novels to African American culture.

So what does all this cultural pride mean for literature? If you grow up in the south, you’re going to imbibe a kind of regionalism that will show up in your writing later. For example, you can see traces of John Green’s southern identity in his novels Paper Towns and Looking for Alaska, even though those novels aren’t specifically about the south, and you can feel the south in the sunbaked streets and cutoff shorts of Kate DiCamillo’s Because of Winn Dixie, Tiger Rising, and Raymie Nightingale. Even  my own novel, which is set on an island off the coast of England, dredges up my southern heritage by playing off a young girl’s deep attachment to her home.

Do you have a favorite kind of regional literature? How does your homeland affect your writing?

3 thoughts on “Why does the south get its own genre?”